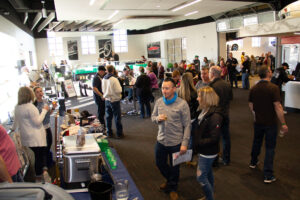 The Shamrock Craft Beer Invitational (SCBI) is back and bigger than ever! We’re taking advantage of our newly added 8000 sq ft pavilion to bring you more breweries, more cars, and more music! The SCBI is unlike any beer festival you have ever attended. Our world-class event mixes the art and grace of beautiful automobiles with the craftsmanship of amazing ales.

25 Breweries from all 4 corners of Wisconsin and Michigan’s Upper Peninsula will be sharing over 70 delicious beers as they compete for 3 different awards. Devour a delicious slice of Pep’s Drafthaus Pizza while you stroll through over 80 classic cars spanning more than 100 years of automotive history. Gerry Sloan and his band will once again be back to serenade you with classic Irish drinking songs and embrace the “Luck of the Irish” by buying into one of our many raffles.

A Special Thank You to Robinson Inc. for Sponsoring this year’s event!

***We take the ongoing pandemic seriously and will follow relevant local/ state mandates.***